Reporting on Abortion: Tips from Our Newsletter

The guidance below collects the thoughts, tips, and must-reads about reporting on abortion and maternal health published in our weekly newsletter, Freeze Frame. The information is presented in roughly chronological order, has been edited for clarity, and is updated where necessary.

What’s the most accurate way to quickly describe those supporting or opposing abortion rights?

The goal for journalists here is to accurately describe a person’s or group’s position without using language loaded with emotional weight meant to persuade audiences to said position. Thus, the term “pro-life” should be avoided, because it is both vague and implies that those who support abortion rights are “anti-life” which is coded and inaccurate. “Pro-choice,” however, accurately describes those who support a woman’s right to choose first and foremost and “anti-abortion” reflects those who support ending abortion access. Longer phrases “abortion rights supporters” and “abortion rights opponents” are more precise when speaking specifically about the limiting or eliminating of legal abortion services. For varied opinions on this topic, see The Guardian, Poynter, and NPR.

What does “culture war” mean? How can journalists use it accurately when reporting on topics of increased public debate?

“Culture war” is a phrase popularized by sociologist James Davison Hunter some 30 years ago to describe conflict over culture — our values, beliefs, and how we live — playing out in the political sphere. Issues given the “culture war” label by news media include laws that target parents of trans children for prosecution, barring LGBTQ and racial injustice education for children, abortion rights, and COVID-19 mitigation.

Defining these as issues of “culture” is misleading. Conflict over such issues is not debate for debate’s sake. Erasing racism and queer communities from our education system is a step toward erasing people of color and LGBTQ people from existence. Eliminating gender-affirming healthcare for kids is a step toward erasing trans adults. Barring access to abortion is a step toward controlling women’s bodies and lives. Banning measures that diffuse the effects of a deadly pandemic costs lives. These issues aren’t about “values” or “how we live,” they’re about who gets to live.

Lumping debates over whose life is worthy and free into the term “culture wars” dilutes the serious and often deadly consequences of whose “values” are enshrined into law. Journalists should avoid using this shorthand and apply the language of human rights and their violations when the issue is life and death for the “loser” of said war.

This tip comes courtesy of a tweet from writer Tara Murtha. She criticized a CNN headline which attributed the phrase “the steady rise in abortion restrictions across the US will worsen maternal health crisis” to “Black women fear.” As Murtha points out, this is not just a “fear” of Black women, it is the established medical consensus, and thus should be reported as fact, not as an emotional reaction by one group.

Attribution is a powerful thing. Attributing a statement to a long-trusted and long-established institution gifts that statement with a sheen of trust reflective of that institution. Attributing a statement to a group of people that, it’s implied, doesn’t have institutional expertise or has special interests paints that statement with uncertainty and a hue of personal or ideological bias. Using attribution this way is a tactic many journalists use to establish their “objectivity.” Rather than stating as fact something that has broad consensus but may be attacked by bad-faith actors or disinformants — such as on a topic like abortion — a journalist can protect their reputation by attributing the statement elsewhere.

The bottom line: journalists should strive to put two and two together for audiences by describing facts as such, not perpetuating bothsidesism and the notion of multiple truths on polarizing topics.

There is a lot of guidance out there on the language and framing to use when reporting on abortion. Much of it promotes sticking to clear, accurate scientific and medical terms over emotional language preferred by activists. Below are some common best practices to consider as well as a list of reporting guides with varying opinions.

Use pregnant people or people who have abortions instead of “women” or “mothers.” Not all people who are pregnant are women.

Avoid pro-choice and pro-life: While “pro-choice” accurately describes those who believe pregnant people deserve the right to bodily autonomy, “pro-life” unfairly paints those in favor of abortion access as “anti-life.” Use action-forward phrases like “abortion access supporters” and “abortion rights advocates” or “people who oppose abortion” or “who think abortion should be illegal” instead of these politicized labels.

Use abortion bans and restrictions carefully: While some U.S. states have imposed restrictions on when abortion is legal, some of these amount to a “near-total ban” due to the small and often impossible to achieve window of time a pregnant person can receive one.

Use later in pregnancy instead of late-term abortion, the later of which is used to trigger emotions and is not a clearly defined medical term.

Avoid words like baby and unborn child when referring to an embryo, fetus or pregnancy. These terms trigger emotions by inaccurately referring to the gestation periods of pregnancy.

Use abortion provider instead of abortionist, which connotes someone providing illicit abortions.

The Growing Criminalization of Pregnancy
Melissa Gira Grant, The New Republic
For decades, even with Roe as the law of the land, pregnant people have been criminalized for abortions, stillbirths, and miscarriages. This deep-dive examines how the effort to criminalize pregnancy would only grow with the landmark ruling overturned.

Of Course the Constitution Has Nothing to Say About Abortion
Jill Lepore, The New Yorker

In A Post-Roe America, Googling “Abortion” Could Put You At Risk. Here’s How To Protect Yourself.
Sarah Emerson and Emily Baker-White, Buzzfeed

Opinion: We Need to Take Back Our Privacy
Zeynep Tufecki, The New York Times
The Columbia University professor’s column explores how unregulated tech has created a data privacy disaster that has already put pregnant people at risk as abortion and even miscarriages are criminalized. The personal data ecosystem is extensive and “do not track” settings make fools of us all. It’s a chilling read but one that anyone who believes in a right to privacy should make time for.

Unimaginable abortion stories will become more common. Is American journalism ready?
Laura Hazard Owen, Nieman Lab
Betteridge’s Law states that any headline that ends in a question mark can be answered with the word “no” and that has never been truer than this story from Nieman Lab. For further proof of that answer, you need only read up on the many pregnant people who are being kept from life-saving treatments and blocked from divorce or whose rights to interstate travel are being threatened by politicians.

That’s it. That’s the tweet. Journalist Josie Duffy Rice underlines the big picture of an overruling of Roe v. Wade. 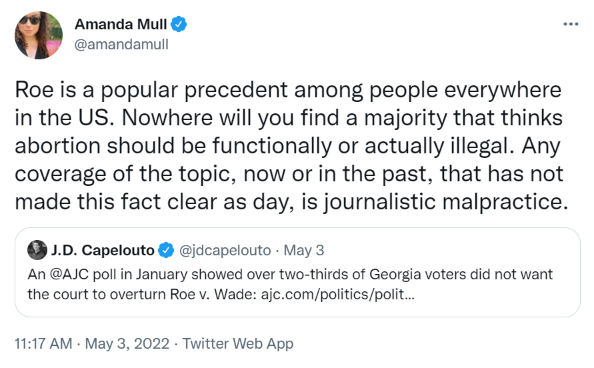 The Atlantic’s Amanda Mull is right: support for Roe and for abortion access has long been popular in the U.S. Reporting should make the event of a Supreme Court ruling going against the will of the people paramount to this conversation.

The leaked draft of Supreme Court Justice Samuel Alito’s opinion on Dobbs v. Jackson Women’s Health Organization suggested that other protected rights could be in jeopardy if the logic used to overrule Roe v. Wade is applied. The headline below, from Time, is referring to those legal consequences, but could easily be mistaken for referring to the also enormous consequences for pregnant people.

The headline from CNN below does a much better job of spelling that out by directly connecting Roe to rulings on marriage equality and access to contraception, both based on similar protections for privacy and autonomy.

In August, Kansans voted on a state constitutional amendment that would eliminate the right to an abortion. The amendment was soundly defeated. Neither of the headlines below describe these events inaccurately, but I wanted to point out a subtle difference in how they frame the result.

The first headline, from The 19th, uses the word “reject” to describe the voters’ choice. This is quite literally what happened on the ballot; voters responded to a “yes” or “no” question. It also describes the amendment as an “effort” that was rejected, which underlines that there is some entity behind the creation of this amendment. That entity: the Republican-led legislature that put it on the ballot. All in all, this headline describes the vote as a reaction to that event.

This second headline from CBS News, on the other hand, uses the phrase “uphold” to describe the voters’ choice. “Uphold” frames the vote as an action, rather than a reaction. And rather than describe the vote as one eliminating state protections, it instead uses the “right to abortion.” Both phrases have essentially the same meaning, but the declarative “uphold right” is subtly stronger language than that used in the 19th’s headline. This is a case where neither headline is wrong or inaccurate by any means. They merely convey varied connotations via word choice.